Pack 66 participated in the Memorial Day parade today. It was a beautiful day for it.

Thanks to all the past and present service men and women. May the sun shine especially bright for you today.

Scott and Oscar are a father and son team that entertain through the use of living visual aids. Friday night they introduced us to an opossum, leopard gecko, and a small relative of the hedgehog, a Neotetracus perhaps?

Saturday morning they introduced us to a rosy boa, a young 18″ long American alligator, a ferret, and a Chinese mantis. Contrary to what you might expect, the Chinese mantis contained no lead.

Friday night we visited Seahawk the 600+ lbs sea lion and his wives and children. The scouts also visited the grey kangaroos. Alex the kangaroo was willing to be petted, and in fact took an intense in one of our leaders! Sheila and Jane were curious about the scouts, but wouldn’t come out to visit us.

We also participated in a scavenger hunt, learning about bats, owls, kangaroos, dromedaries, tree geckos, naked mole rats and sea lions. The reward for finishing the scavanger hunt, besides increased knowledge of the animals in the zoo, was access to the slide in the Boabab tree!

Mario and Luigi the Sicilian Donkies.

Scott and Oscar give us a crash course

Scott brings on the opossum!

Scott shows how tame an opossum can be

Cubmaster Miller surveys the landscape during the pizza party!

The lady in blue in the back corner is Jamie, one of the educators of the PGH Zoo.

Llamas must never sleep. This one placidly watched the entire scout scavenger hunt.

Tropical fruit bats, 2400 of them live in this room!

Scott and Oscar introduced the ferret, one of the most popular of the teaching animals.

The ferret definitely is furrier and cuddlier than the gator.

I think this baby sea lion likes us even more than we like her!

Hey, there she goes up for air again.

I'm just going to sneak around the backside of these humans.

Wow, humans must have keen senses, they saw me!

I wonder how they can hold their breath so long?!?

The snow leopard blends right in with its rock.

The zoo lost their big komodo dragon, but the little ones are adorable!

And so you shouldn't swim with them.

The flamingos proved popular with our bird lovers.

The lions are born to rule, zoo or savannah.

The Amur Leopard is both beautiful and exceedingly rare.

Be careful, those critters look dangerous!

Is that King Julian there on the left?

Not, that's not a scout. It is a howler monkey.

The African Painted Dogs are one of my favorites. They just look so cuddly.

Where does a 400 lbs bear sleep? Anywhere it wants.

Our scouts learn about bait casting.

It's trickier than it looks.

Our instructor was John Hayes.

The aquarium was popular, as were these seahorses.

Chilling in front of the shark tank. Did I mention kids love sharks?

I always thought polar bears were a little larger.

On the bright side, you fit more of them in a cage.

Check out our cool new visors!

Calm, quite, arm's reach away. No hunting allowed though!

Beavers enjoying a little corn on the cob.

Day camp is an exciting and fun filled three days (no overnights) of camping during the summer.

The theme for this year’s day camp was “Sword in the Stone”, and it was a medieval experience! 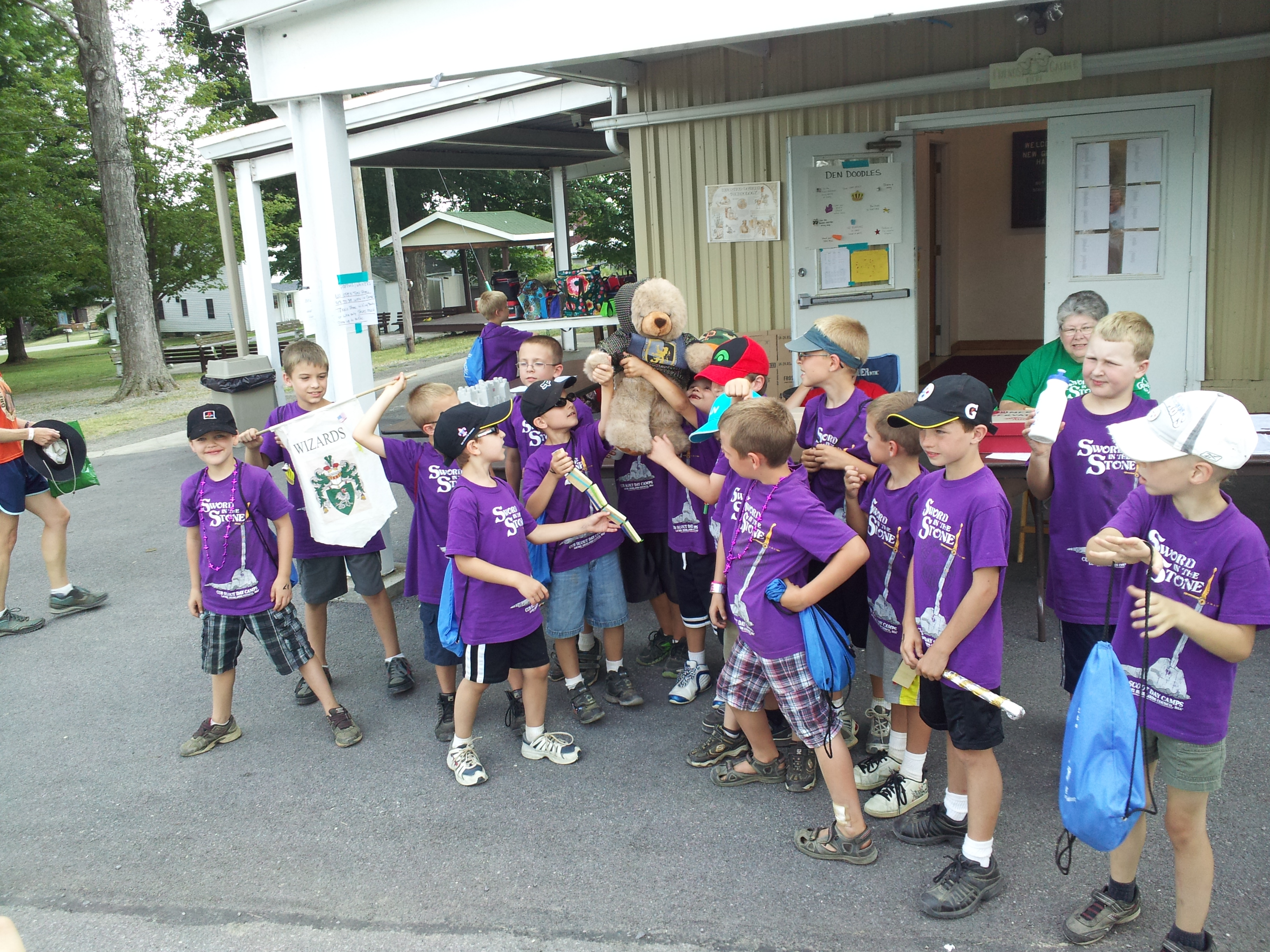 The Wizards prepare to raise the flag for Day 2.

That's right, we get to raise the big flag!

The Wizards also led the song at lunch time on Day 2. We've got booming voices!

Team Ganzy USA is a brother and sister fencing team that has competed worldwide.

Day 2's special event was the opportunity to watch Team Ganzy show off their moves!

They even passed a real fencing sword around the scouts!

Our Eagle eyed Wizards spotted Cubby the Mascot misbehaving. Cubby had wander outside of the Camp's borders.

We earned another badge for our banner by staying alert and helping Cubby stay safe.

Every day during Theme we had a different theme-related craft. Here you see us making a medieval shield with our own custom herald.

Fun for scounts AND adults!

We listen intently to the jousting game instructions.

Then it's game time!

Helmets on, swords up, let's roll!

There's nothing quite like beating the tar out of each other with foam noodles.

In case you didn't notice, Day Camp rocks out loud!

We are the Wizards, couldn't be prouder! If you can't hear us, we'll sing a little louder!

The BB shoot and Archery are two of the most popular activities. On the rifle range, Red Ryder rules.

Our Pack shoot resulted in a score of 19.

Each scout shot once at this target.

This is our Wizards banner. Dani did a knock up job on it, and we worked hard to decorate it with every available badge.

The scouts are prepping for the closing ceremony, including a whole slew of skits.

Two Wizards, one in full battle dress, the other using his wand to conjure a plastic fish from the Trading Post. 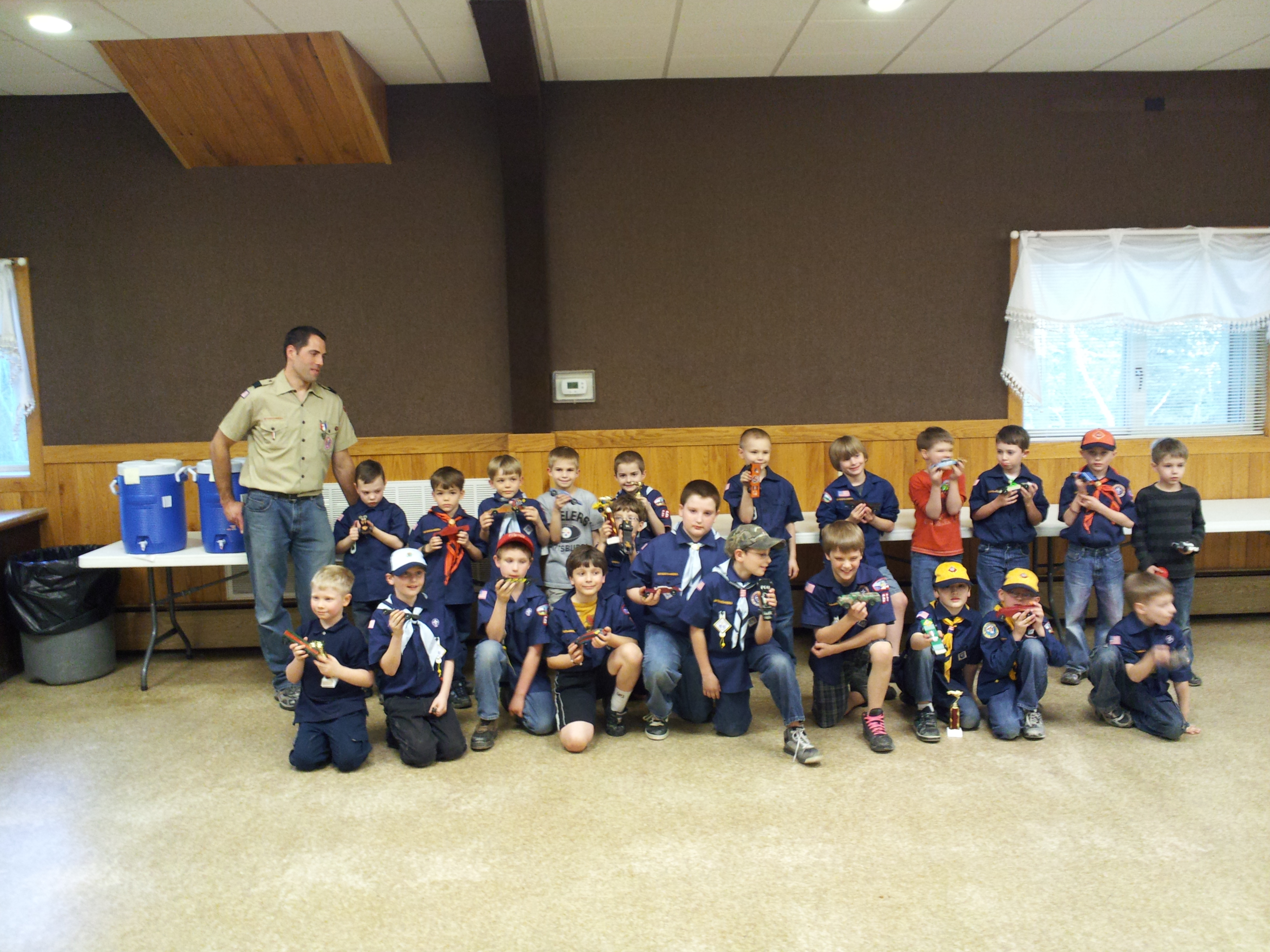 The Pine Wood Derby is held concurrently with the Father Son Cake Bake. The Cake Bake provides a significant source of income for the Pack.

This year’s winners made the local paper. More importantly, everyone had a smashing good time running their cars down the track.

Battle of Endor by Alex S

James and Preston, two of our most active scouts!

Delicious and ... okay, the cakes were delicious, nutritious maybe not as much.

March Madness by Nathan and David

Awe inspiring cake, my photography is a little weak.

One of our tigers brought this, again my photo falls short.

A wii controller cake by Ethan and Brian, original and very popular!

Gavin brought us this Steelers football cake. If you want a cake to go over well, this is a good approach.

Zach brought us this amazon turtle!

Shamrocks and pots of gold, what better way to celebrate the month of March?

Deep Sea Fishing by Isak. Isak is one of our most athletic wolves.

Andrew brings us a cake make of butter cream frosted cupcakes. Considering that many of the cakes are consumed on site during the Derby, this works great!

Did I mention that many of the cakes do not make it back out the front door?

The Father & Son Cake auction is a principle source of income for the Pack. Some cakes sell for over $100 as parents and grandparents compete to donate to the Pack.

Folks lined up to eat.

Getting scouts lined up for a picture brings to mind the notion of trying to herd cats.

If you think getting scouts to hold still is challenging, try getting a scout master to stand still for a picture!

There he is! The gang's all here!